With the recent Saga Legends release of two all-new Jedi Starfigther vehicles, From 4-LOM to Zuckuss is taking a look back at the previous incarnations of the Episode III spaceship.  So sit back, strap-in and put just your headpiece on (because apparently flight suits are not needed during the prequel ear?) as we fly through each release and reissue of the Jedi’s newest and last starfigther. 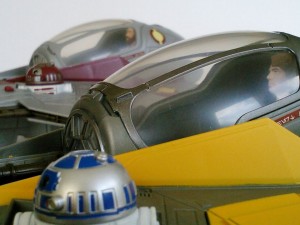 The year is 2005 and the release of Star War Episode III: Revenge of the Sith saw our heroes following the Prequel Trilogy tradition of piloting different vehicles with each successive film.  Unlike the Original Trilogy where X-Wings and Falcons remained steadfast throughout the series, the prequels preferred to switch it up with each new installment.  In the opening scenes of Ep. III, Anakin and Obi-Wan are seen piloting the latest model of the Jedi Starfighter through the Battle of Coruscant.  An in-universe upgrade from the Episode II Delta-7 Aethersprite-class light interceptor, the Eta-2 Actis-class light interceptor of Episode III resembles a clear progression toward the vehicles of the future Galactic Empire.  In action figure toy form the Eta-2, like its predecessor the Delta-7, will go on to be rereleased and repainted numerous times with each new action figure series.  Below is a chronological look at each of the 10 unique versions of the Episode III Jedi Interceptor that has been released so far to date.

The initial offering of the Eta-2 was released in conjunction with a small wave of Revenge of the Sith “Sneak Preview” toys.  The version was offered at the same time with four “Sneak Preview” action figures and included (as most of the following releases will) an Astromech “panel” which may be inserted into the droid socket.  The term “panel” is used as it is not a true Astromech action figure but simply a sculpted shell resembling the upper-half of an Astromech droid.  In this instance, Anakin’s trusty droid R2-D2 is portrayed on the panel.  This starfighter would be reissued three more times with the first coming just months after its debut with the launch of the main Revenge of the Sith action figure series. 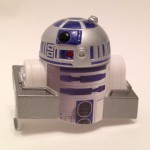 The second version came in the form of Obi-Wan Kenobi’s Jedi Starfighter which he piloted at the Battle of Coruscant.  This vehicle is a basic repaint of version 1 and features the doomed R4-P17 on its Astromech panel.  This version, which must be popular with Hasbro, would be reissued more than any other version to date.  It was even chosen as an exclusive in an International Toys ‘R’ Us battle pack which also featured an Obi-Wan figure, a General Grievous figure and his starfighter,

Anakin was again at the controls of the third release of this vehicle.  Since losing his first fighter while rescuing Chancellor Palpatine, Anakin was forced to choose a different fighter for completing his dark mission to Mustafar.  One might argue this should be called Darth Vader’s Jedi Starfighter but we will get to that shortly.  As for his Astromech panel, R2-D2 was correctly portrayed.  Since this first version was an exclusive, it included an Anakin figure where the 2008 reissue would not.

Hasbro wasted no time in 2005 in cranking out no less than five Jedi Starfighter releases.  The fourth version, like the third, was a Toys ‘R’ Us exclusive and featured a “Bonus” Obi-Wan action figure.  This time the vehicle represented Obi-Wan’s blue and white starfighter which he used to travel to Utapau with the company of R4-G9 (which is featured on the Astromech panel).  This version would be reissued two more times, once in the TAC series and once strangely enough in The Clone Wars series which takes place before Revenge of the Sith.  Both rereleases would not feature the bonus Obi-Wan figure.  The most interesting note about this version is that it is continually released with the incorrect sticker sheet.  All three times, this starfighter has included version 1’s yellow Anakin Skywalker sticker sheet.  Now the reason this version continued to include the wrong set of stickers is mystifying as Hasbro did indeed create a corrected and accurate sticker sheet back in 2005.  What many collectors did not know is that this set could be had, at free of charge, by simply calling Hasbro’s customer service line and requesting one. 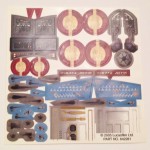 Version five become the first version to not be featured in a movie.  Like all things associated with both actor Samuel Jackson and Jedi Master Mace Windu, this Jedi Starfighter and its R4-M6 Astromech are colored purple.  This version would be reissued just once for the 30th Anniversary series.

It took Vader getting his life-support armor to finally get his own correctly titled Sith Starfigther.  The sixth version is the only one to feature the Imperial cog instead of the Republic cog, which only makes sense.  This Expanded Universe fighter includes Vader’s black R4-K5 on the Astromech panel and has only ever been released once.

Another version to have only been released once is Version 7.  Based on its brief appearance in the comic book Star Wars: Obsession, Aalya Secura’s Jedi Starfighter stands out from other releases for a couple of reasons.  First it is the first version to be released without a battle-damaged or worn paint deco.  Second, this Target exclusive included an Astromech panel which was painted and not stickered to portray her droid R4-G9 (yes the same R4 Obi-Wan borrowed to go to Utapau).  And third, it is the only release to not come included with a sticker sheet.  But just like Version 4, Hasbro did create a unique set of stickers for this release and again collectors could receive one by contacting customer service.  It is important to note that the sticker sheet did not include a sticker for the Astromech panel and the stickers, like the vehicle, were non-battle-damaged as well. 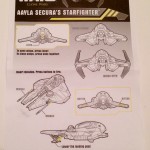 The least canonistic version of the bunch, Version 8 gets a Mickey Mouse inspired paint job for this release.  Although neither connected nor featured in Star Tours, this version bears the name of the Disney park ride.  This is the first version to not include an Astromech panel but instead includes two action figures, Jedi Mickey and a build-a-droid version of R2-MK. (Photo courtesy of Galaxy of Toys Podcast)

The most drastically different release of the Eta-2 came in the initial offering of vehicles from the 2013 Saga Legends series.  Both Version 9 and 10 were released simultaneously and took many collectors by surprise.  The surprise came in the scale reduction of these brand new molds of the Jedi Starfighter.  In what is believed to be a cost-reduction move, Hasbro reduced the size of their “Class II Attack Vehicles”.  These new versions no longer included an Astromech panel but instead had a dedicated (non-removable) Astromech dome attached to the fighter craft.  This version again represented Anakin’s Jedi Starfighter from the Battle of Coruscant and included an R2-D2 deco’d dome. 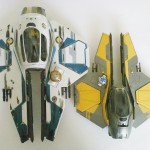 Version 10 was a new sculpt of Jedi Master Obi-Wan Kenobi’s Battle of Coruscant starfighter which meet its end in the hanger bay of the Invisible Hand. Another difference other than mold of the ship that makes this starfighter different from that of the 2005 version is that it is a clean, non-battle-damaged version.  The same goes for Version 9 as well.  R4-P17’s non-removable dome clearly solidifies that this was the version of Kenobi’s starfighter that appeared prior to the massive opening battle since the dome is unable to accommodate the Buzz Droids’ decapitation of the his poor R4 droid.

IMAGE COMING SOON Version 11 like its small scale predecessors, features a clean version of Master Kenobi’s second starfighter from Revenge of the Sith.  With six years having passed since this vehicle was last released, Hasbro chose it to be one of the few Prequel-themed vehicles to include in a line primarily focused on the Original Trilogy era.

Well, there you have it! Eleven unique versions, 2 distinct molds, 22 separate releases, 5 exclusives, 6 different Astromechs and 100’s of dollars worth of Jedi Starfighters.  Who knows how many more versions will follow in the future but if there’s one thing we do know here at From 4-LOM to Zuckuss its that “Star Wars is Forever” and so is our action figure fandom.