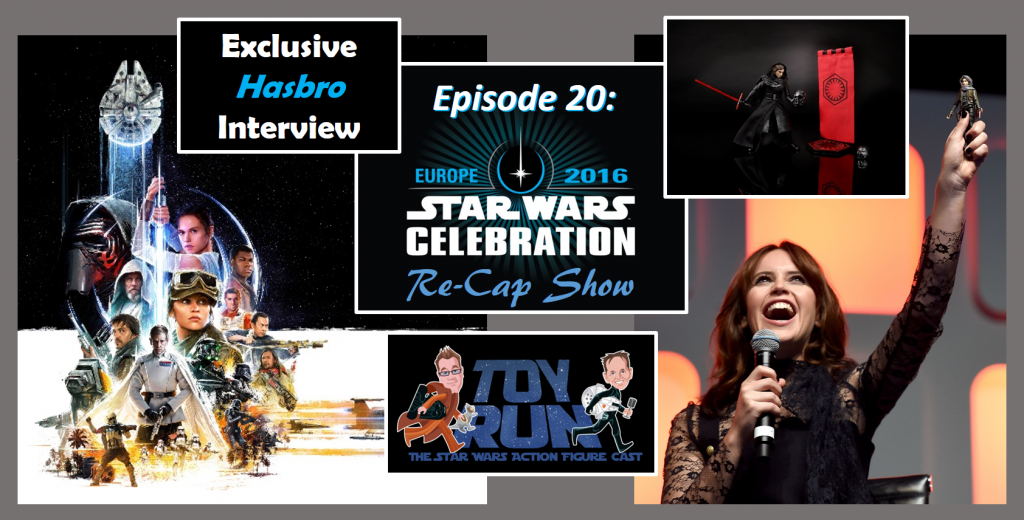 In this week’s episode Criz Bee and Jake Stevens discuss Star Wars Celebration Europe 2016. They bring you an exclusive interview with Steve Evans from the media lounge and discuss every Star Wars action figure displayed on the showfloor, including figures from Hasbro, Jakks Pacific and Tamashii Nations. The team also compiled a list with Star Wars action figure news surrounding and coming straight from Star Wars Celebration Europe 2016, they discuss the Rogue One panel and list upcoming events in the collector calendar! All this and more in Episode 20 of TOY RUN!

All episodes are available for free download on iTunes, Stitcher and galaxyoftoys.podbean.com!

TOY RUN is the only podcast solely about collecting, reviewing and appreciating Star Wars action figures. The show is hosted by Criz Bee from JediBusiness.com and Jake Stevens from From4-LOMtoZuckuss.com.  When these long-time Star Wars collectors and good friends wanted to talk about Star Wars action figures even more than they do monthly on the Galaxy of Toys Podcast, they created TOY RUN.  The hosts who collectively have more than four decades of Hasbro Star Wars collecting experience as well as fond childhood memories of growing up in the 70’s and 80’s playing with Kenner action figures, strive to share their love and knowledge of collecting Star Wars figures with fellow fans of the hobby. TOY RUN is hosted on the Galaxy of Toys Podcast Network, which can be found as a featured podcast on starwars.com, as well as on iTunes, Stitcher, The Zune Network and Podbean.

About Galaxy of Toys Podcast

Galaxy of Toys Podcast is a discussion about Star Wars toys from the past, present and future. The show is hosted by creator Jason Luttrull and co-hosted by Tom Berges from IGrewUpStarWars.com, Criz Bee from Jedibusiness.com, Ryan Beise from Star Wars: Collecting Cosmos Podcast and Jake Stevens from From4-LOMtoZuckuss.com. The show, which is a featured on starwars.com, can be found on the Galaxy of Toys Podcast Network for free download through iTunes, Stitcher, The Zune Network and Podbean.