Targets across the country have completed their “fall resets” (where they rearrange their aisles to make room for new merch and toy lines) and in the process vastly improved the Star Wars presence in their toy aisles. By adding large and impressive signage and new Star Wars Rebels, 6″ The Black Series, Jaxx’s 20″ figures and Star Wars Command products they are geared up for bringing Star Wars to many a Christmas tree this winter.  But with this increased presence, not a new 3 3/4″ figure is to be found. The only figures that appear to be showing up currently is the previously hard to find Mara Jade and Darth Plagueis wave of The Black Series. Now August is said to be the release month for Wave 5 of The Black Series but these have yet to even be released through online retailers (which normally receive them first) so at this point time will have to tell. 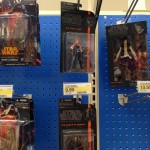 in their “feature area” (the major displays with fancy signage in front of the entrance typically featuring a recent media tie-in) they too have received many of the newest Star Wars items previewed at San Diego Comic-Con.  Now unlike Target they did receive one new 3 3/4″ item; their The Black Series “Battle on Endor” exclusive. Costing a cool Benjamin, this set filled with all re-releases with slight paint differences will most likely sit until Christmas when sales and discounts run amok. 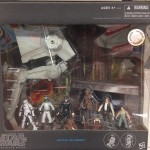 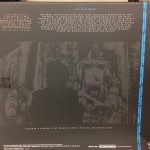 Toys ‘R’ Us Canada did release the following video featuring Star Wars Rebels (which is set to debut in October alongside its action figure line) and this gives us hope that TRU will be place for new figs in the future. Especially if their feature area finds the Force.